Not all things are as it seems! I was under the impression that both x-ray machines at the main Tenwek Hospital were functional and the batteries had been changed about a week ago. GUESS WHAT? The main x-ray machine was not functioning properly after the batteries were changed. We tested the batteries using a test rig I developed for such an occasion and the batteries tested OK. The ERROR code during exposure was not being caused by the batteries. After 4-5 hours of testing, it appeared the x-ray tube was going BAD. I was able to get the machine somewhat useable by drastically changing the calibration.

The second machine has not yet had the batteries changed and I noticed the wire connections were badly corroded. Fortunately, I had a few of the wire jumpers in my bag of “GOODIES” and the national technicians changed out the batteries successfully. The calibration was performed satisfactorily.

We quickly organized the national staff for several different tasks. One group found a nice table to put all the DR equipment on including computers and monitors. Another group carried the components to the x-ray room. Both groups helped with the hookup of the cables. During the whole day we worked around a very busy x- ray department which averages over 100 x-rays per day. Nevertheless, with the biomed staff and IT, the cables got put in place and the computers were programed by 4 PM. At 4 PM, we had Joe from Del Medical again log into the computers through Team Viewer and then the real FUN stuff started. Each of the 5 DR detectors must be recognized by the correct computer and ACCESS points or the portable Tablet. The images were fantastic in quality. Next, we needed to calibrate each detector which took 13-15 exposures. By 7 PM we were finished, and all was well!

One of the first patients for the DR imaging system was a little boy with pins in his hip after surgery. The doctor and radiology technician are examining the x-ray for details and exposure. Except for the little boy, everybody was smiling. Feedback from two of the doctors indicated a much-improved x-ray image quality. The radiology technicians processed more than 160 patients with multiple exams in 6 hours not counting lunch using the new DR imaging system with both x-ray rooms now functioning. With the previous CR system, this number of patients took nearly 9-10 hours to process.

Back in 2015 a group of us installed the medical gas machines and distribution system in the Eye and Dental Clinic. With the DR system working great, I went to the machine room and took a quick look at the O2 concentrator, vacuum, and instrument air machines. Hose connections from the compressor to the O2 machine were leaking and there was oil on the floor in various places. Little by little we repaired the various problems. We also changed out the filters in the O2 machine. Nevertheless, Instrument AIR Compressor was DIFFERENT story. It appears extraordinarily little TLC had been performed on this machine. There are two water separator filters located after the compressor “after coolers” and before the Desiccant dryers. Before sets of separators were leaking badly. I disassembled them and many replacement parts are needed. Since these devices were not working, water has gotten into the Desiccant Dryers and I feel spoiled them. It is going to take a BUNCH of money to get his machine running again.

Now that we are back home safely, there is much to follow up on with Tenwek Hospital. We submitted proposals from rebuilding a medical air compressor and a new vacuum pump to adding an additional x-ray machine dedicated for chest x-rays. Included in this list is nearly 15K of replacement parts for the existing x-ray department at the main hospital. There is never really placing a CHECK IN THE BOX as COMPLETE for Tenwek Hospital. 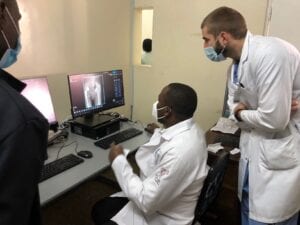 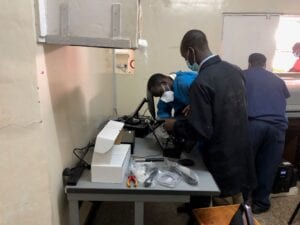